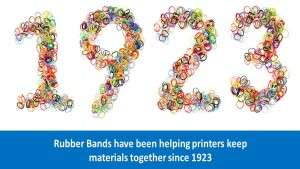 Do you ever think about how many rubber bands you use, and how you store them? Probably not.  So we’re going to give you a lesson on this most unassuming item on your desk. On March 17, 1845, Stephen Perry of the rubber manufacturing company Messers Perry and Co, Rubber Manufacturers of London, patented the first rubber bands made of vulcanized rubber. Perry invented the rubber band to hold papers or envelopes together.

In the United States, William H. Spencer of Alliance, Ohio, obtained rejected inner tubes from the Goodyear Co. and began cutting them into bands in his basement. Spencer, who worked for the Pennsylvania Railroad, began trying to sell his rubber bands on the side to office-supply stores and paper and twine outlets.

The story goes, according the Cincinnati Examiner, that in 1923, Spencer noticed the pages of the Akron Beacon Journal, his local newspaper, were constantly being blown across his and his neighbors’ lawns. He came up with a solution and persuaded the newspaper publishing company to bind newspapers with his bands. He talked the Tulsa World into doing the same, and grew his business from that starting point.

Today, more than 30 million pounds of rubber bands are sold in the United States each year, and printers continue to use them in their plants as a low-cost way to assemble materials.