Paper Plays a Role in History: The Declaration of Independence

The Declaration of Independence 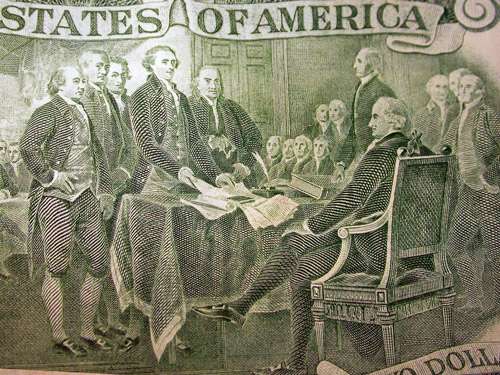 The Declaration of Independence is arguably one of the most influential documents in American History.

Other countries and organizations have adopted its tone and manner in their own documents and declarations. At the Second Continental Congress during the summer of 1776, Thomas Jefferson of Virginia was charged with drafting a formal statement justifying the 13 North American colonies’ break with Great Britain. A member of a five-man committee that also included John Adams and Benjamin Franklin, Jefferson drew up a draft and included Franklin’s and Adams’ corrections. At the time, the Declaration of Independence was regarded as a collective effort of the Continental Congress; Jefferson was not recognized as its principal author until the 1790s.
According to the Library of Congress, analysis by paper conservators has determined that the paper is mostly likely Dutch in origin. However, the first paper mill in America was established in 1690 by William Rittenhouse near Germantown, Pennsylvania. Most early mills in the American colonies were started by transplanted papermakers, like Rittenhouse, who modeled their operations on European mills of the day. Many colonial paper mills, such as the Rittenhouse mill, were also located near print shops. These mills had to be located near populated areas that could provide a reliable supply of rags, the main raw material at that time. A generous supply of fresh water was also a requirement, both for washing the fibers and turning the mill machinery.

The Declaration, the Constitution, and the Bill of Rights are currently housed in the National Archives. All three are written on parchment, not hemp paper. Parchment is treated animal skin, typically sheepskin. The Declaration was inked with iron gall ink. Thomas Jefferson's original Rough Draft of the Declaration is now in the Jefferson Papers collection at the Library of Congress. The finished document was signed by the all the delegates to the Continental Congress.