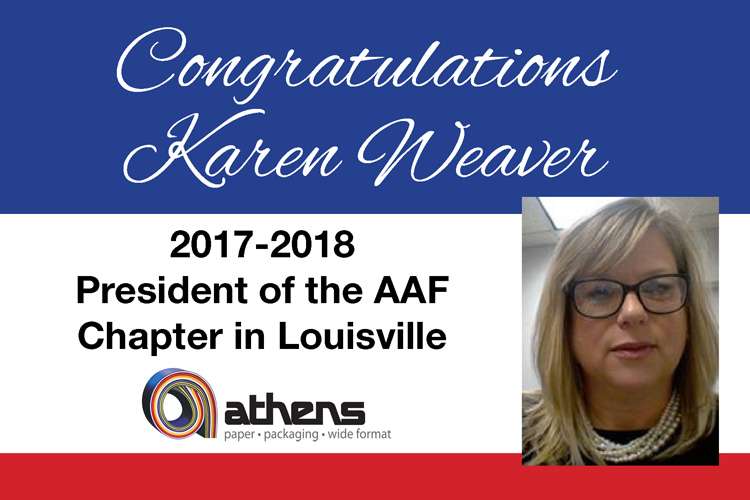 Athens is proud to announce Karen Weaver, Specification Representative has been voted the 2017-2018 AAF President at the Louisville Chapter.

Karen is passionate about design and paper. Prior to working for Athens, Karen worked as a Production Director for both agencies and corporations. Before her election, she served as First Vice President of the Advertising Federation of Louisville.

In the past, Karen has also chaired the committee for the Louies/Addy’s. Under her leadership, the Louisville chapter received recognition by AAF National for having the largest increase in entries of all Division One clubs in the country—an achievement that won her the AAF President’s Star Award for outstanding accomplishments by a member of the Executive Committee.

Karen is a graduate of Murray State University with a B.S. in Organization Communications and Speech Communication. She has been married for 23 years to Mark and their son, Jacob, is a sophomore at Milwaukee School of Engineering on a National ROTC Scholarship. Karen enjoys learning to play golf, beaches, and backpacking – and sharing her knowledge with the many people she meets in the market.