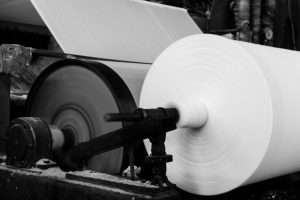 2017 turned out to be a flat year for many printers, in spite of the improvement in overall business conditions.

Much of the sales increase for printers came from changes in product mix, with increases in digital, wide format, mailing, and fulfillment. These changes generated little or no paper consumption, and as a result, paper mills fell short of 2016 sales totals. Paper merchants expanded into wide format and packaging to fill gaps from falling paper demand. Paper mills, however, could not expand their product offerings, and lower demand and falling prices took a toll on many of these companies. Domestic coated suppliers, in particular, were hurt, as imports continued to come into the country and market pricing fell below the level where many of these mills could cover their costs. Verso Paper Company, which filed for Chapter 11 Bankruptcy twice in a three year period while closing several machines, announced the closure of a 200,000-ton machine in Jay, Maine in July of 2017. Appleton Coated filed for Reorganization in September and was sold at auction in October. The new owner will no longer make coated paper, reducing domestic coated production. West Linn Paper Company, a coated mill in Oregon, announced in October that they were permanently shutting down.  Appvion, the maker of NCR Carbonless and inkjet paper, filed for Chapter 11 Bankruptcy in November. SAPPI is transitioning a portion of their production in Somerset Maine away from coated products over to packaging grades. The reason for all closings and filings was simple – the mills could not be run profitably based on reductions in both demand and market pricing. The Sky is Not Falling, but it will definitely be cloudy for the next several months.

What does this reduction in domestic coated supply mean? For the short term, there may be tightness in supply of US inventory levels. C1S litho is now more difficult to obtain. Coated web has seen a definite reduction in capacity, and backlogs are moving out. Special making sizes are difficult to get, and they may now carry an upcharge. Cover weights have increased as a percentage of total demand due to direct mail, and they are not as readily available as text weights. In spite of the closures, there is no shortage of paper worldwide, and the US remains a target market for imports. It will take several months, however, for adjustments to be made, with more imports brought into the US to replace lost domestic stock. Buyers can still get what they need, but it may require more advanced planning and a willingness to accept alternative grades. While imports can replace domestic stock, the lead times are substantially longer and the need for local inventory increases. At Athens, we recognize this transition and have committed to an expansion of what were already high inventory levels.

Paper Prices - In July there was a 4% increase on coated paper, with increased lumber pricing pushing pulp upward. Not surprisingly another increase of approximately 4% was just announced, effective mid-January, by both domestic and foreign mills. Even with these increases market pricing for commodity coated will remain below levels of 10 years ago. What happens to prices later in the year will depend on how well imports can replace domestic manufacturing, the strength of the US economy, exchange rates and any changes in US trade policies. If the tax changes just passed succeed in bringing back manufacturing to the US, we would anticipate greater demand for packaging and increases in demand for SBS board and other packaging grades. Price increases will not be driven by supply and demand as much as rising costs, economic need, and ROI for the paper industry.

Coated pricing in 2017 remains well below levels from 25 years earlier, even without adjusting for inflation. Unfortunately, the vast majority of domestic paper machines are over 40 years old, and simply cannot be competitive with the new, larger, faster machines from Europe, Asia, and South America. Why is this? Quite simply environmental considerations. When the environment became a national issue in the late 1960’s it was primarily about water pollution. Paper mills were on the front line of industries targeted, and over the next 30 years, the majority of money invested in the industry went toward environmental improvements. Today, in spite of advances in pollution control, the construction of a new world-class paper mill or machine would be financially and politically challenging, and the prospect of a new domestic machine is highly doubtful.