A History of the Valentine 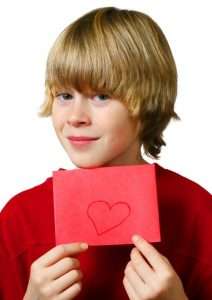 In 15th-century France, 14 February became an annual feast day celebrating romantic love. Lavish banquets with singing and dancing were held to mark the occasion. It was also a 15th-century Frenchman who committed the earliest surviving Valentine’s greeting to paper. While imprisoned in the Tower of London following the 1415 battle of Agincourt, the Duke of Orleans wrote to his wife:

This translates roughly as, “I am already sick of love, my very gentle Valentine.”  Not quite how we would say it today, but you get the gist of it. Approximately sixty of the Duke's poems remain and can be seen among the royal papers in the British Museum. They are credited with being the first modern day valentines.

The first Valentine cards were sent in the 18th century. Initially these were handmade efforts, as pre-made cards were not yet available. Lovers would decorate paper with romantic symbols including flowers and love knots, often including puzzles and lines of poetry. Those who were less inspired could buy volumes that offered guidance on selecting the appropriate words and images to woo their lover. These cards were then slipped secretly under a door, or tied to a doorknocker.

During the Victorian Era and its printing advances, Valentine cards became even more popular and the modern postal service of the age implemented the "penny post," which made it easier to mail written valentines. (Prior to that time, postage was so expensive that most cards were hand-delivered and usually left on doorsteps.) Known as "penny postcards" (because they were mailed with a one-penny postage stamp) these valentine greetings were very popular from around 1890 to 1917.

In 1913 Hallmark Cards produced their first Valentine’s card, representing a key development in the commercialization of Valentine’s Day.

If you choose to give a paper card to a loved one, know you’re embracing a tradition that has lasted more than 200 years.